17 Evolutions of Your Favorite Logos

Have you ever wondered how graphic designers created logos before the computer? And how they must’ve drawn them, shipped them, and the company had to replicate a stamp in order to print them?

New technology is part of the reason logos have undergone some dramatic evolutions over the years. But it’s mostly because these companies and their brands have changed over time.

The original logo was designed by Steve Jobs and Ronald Wayne and it depicted Isaac Newton sitting under the infamous apple tree. Then, Rob Janoff designed the first rainbow Apple logo with a bite out of it so it wouldn’t be recognized as another fruit.

The Microsoft employees referred to the “O” in the green logo as “blibbet” and they even had a double cheeseburger in the company cafeteria that was called the “Blibbet Burger”.

The original logo features an eagle carrying a package with the words, “Safe, Swift, Sure” inscribed on the side. Both the current IBM and the third UPS logo were designed by the same guy, Paul Rand. He also created the logos for Enron, ABC, and Steve Jobs’ NeXT. 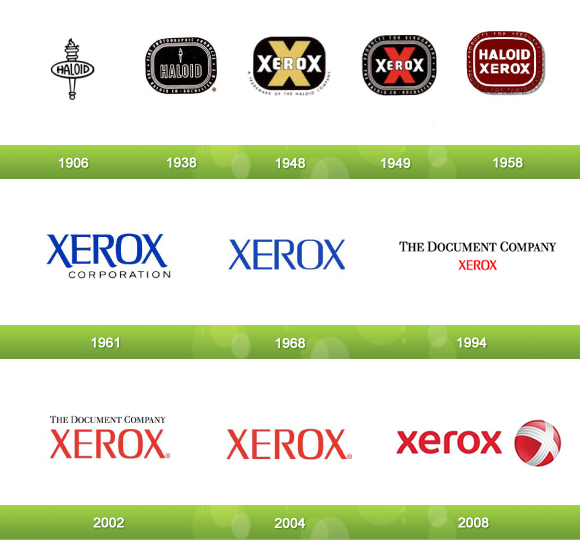 Haloid invested in Chester Carlson’s xerography (aka photocopy) invention in 1938 and it became the most successful division of the company so they switched the name and logo. Kodak was originally called “The Eastman Kodak Company,” hence the “EKC” in the original Kodak logo.

Their first camera was named, “Kwanon,” after the Buddhist goddess of mercy. The original logo was a picture of this goddess with 1000 arms and flames.

As the oldest original logo in this list, it depicts an image of a fish because Fredrik Idestam founded the company as a wood pulp mill on the banks of the Tammerkoski Rapids. BP’s logo was largely unchanged through its first 80 years until they introduced the Helios symbol in 2000 to represent their commitment to producing energy in all of its many forms.

The 1958 BP logo and 1971 Shell logo were designed by the same guy, Raymond Loewy, who also designed the Exxon logo.

The 1909 logo was created with Childe Harold Wills’ font that he originally developed for his business card.

I know what you’re thinking. Why does the original Volkswagen logo slightly resemble the Nazi symbol? Well, that’s because Hitler had a hand in founding the company. Naturally, Volkswagen phased out that part of the logo and stuck with the center. The three pointed star represents their original intent to make vehicles in land, water, and sky. The four circles represent how Audi started as a merger of the four above companies. In 1941, Pepsi adopted the colors red, white, and blue to commemorate the war efforts of the United States.

Mountain Dew was originally invented as moonshine by a couple of Tennessee hillbillies with the tagline, “It’ll tickle yore innards!” This is represented in their original logo.

The Point for Young Entrepreneurs

The evolution of these logos is just one way to show that no company is perfect, but the good ones get started and adapt. Heck, five of the 17 companies changed from their original logo within the first year.

Too many young entrepreneurs wait until the planets are aligned to start their business. Don’t let not having a shiny logo get in the way of what’s actually important… You know, getting started.